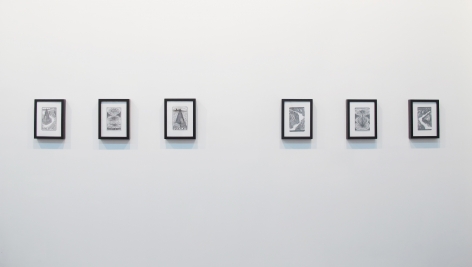 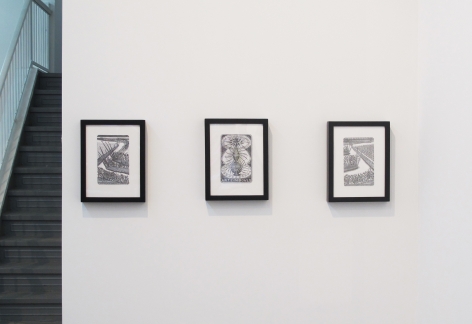 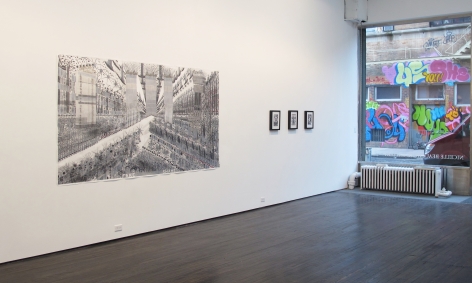 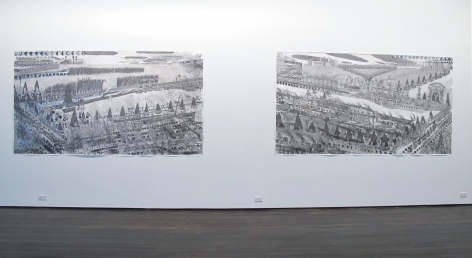 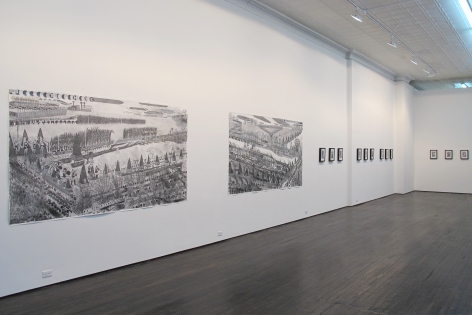 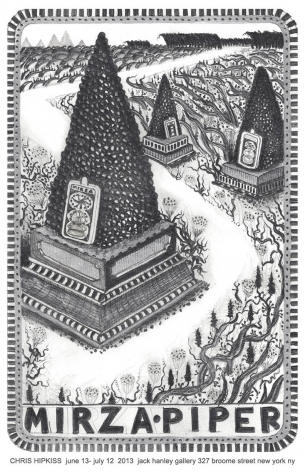 Christopher Payen and Alpha Mason met at the age of 18 in a case of love at first sight. Since the late eighties, the couple has worked under various names in parts of the United Kingdom before breaking from British Suburbia in 2001 for the French countryside. Now under the pseudonym “Chris Hipkiss”, the result of their 20+ year collaboration is a singular and multifarious visual language. Populating these vast, subsuming metropolises and more intimate scenes of a city’s interior, their vocabulary reflects long-developed interests in politics, travel, ornithology, as well as feminism and femininity. Traversing the ancient and futuristic, the obsessively detailed drawings recall Bosch and Brueghel or Classical frescoes in which all things, living and non-, process toward an unknown destination. Wordplay is an important part of this vocabulary. Adorning the tops of buildings or interwoven into figurative forms,phrases such as “Lossless, lossless, lossless” enter in contemporary buzz-words, and this particular one hints at a sci-fi singularity of information, a memory that never loses.

Perhaps representative of the contemporary struggle in identity-seeking, the cities in the Hipkiss universe seem both oppressive and rife with fertile ground. Unfurling in hypnotic repetition, the “cyber-dominas” that inhabit these post-industrial parallel worlds are personas of the artists themselves. By trying on different “uniforms,” some of them historic female figures, some enigmatic, the artists not only lay bare a search for identity, but also the process of two people becoming one unit while proliferating new selves.

This is the first solo exhibition of works by Chris Hipkiss at the Jack Hanley Gallery.The artists have recently exhibited at Ancient & Modern, London (2012), Susanne Zander, Cologne (2011), Galerie Michael Haas, Berlin (2009). Works by the artists are represented in several collections such as Collection Antoine de Galbert , Paris; the Cindy Sherman Collection, New York; and the Museum Boijmans Van Beuningen, Rotterdam.