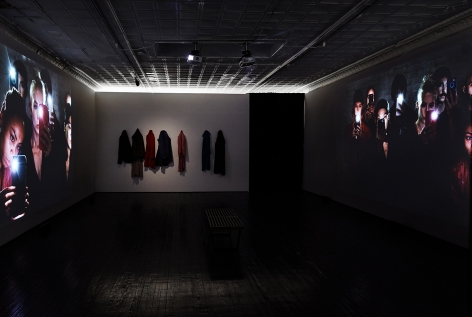 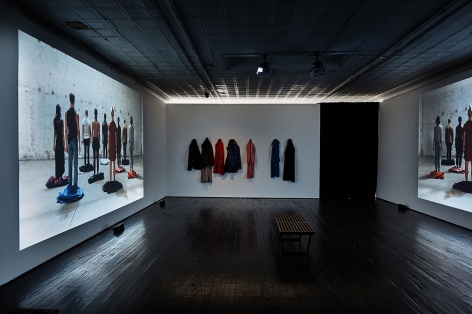 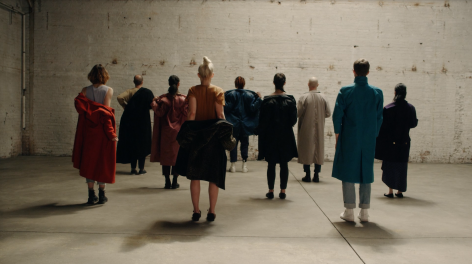 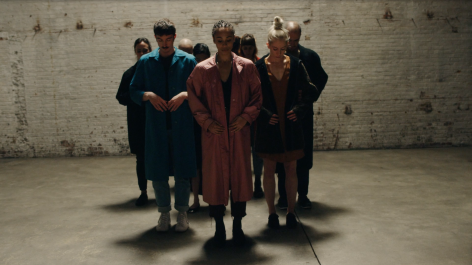 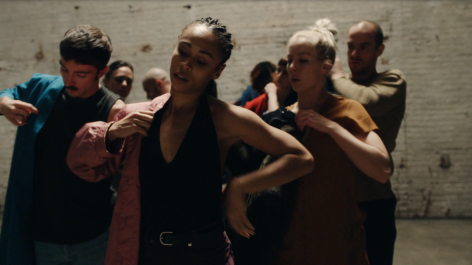 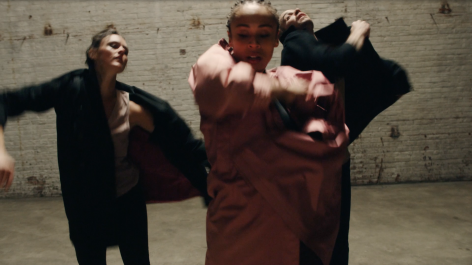 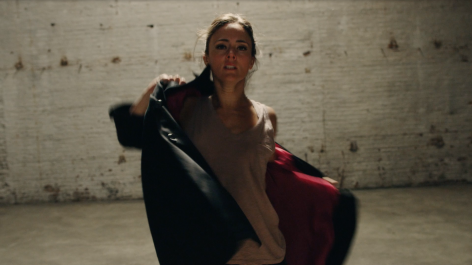 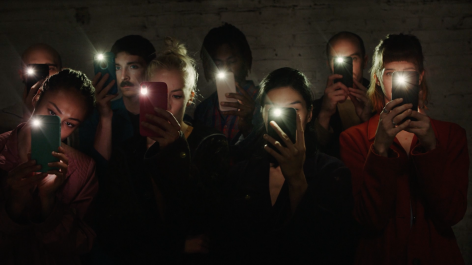 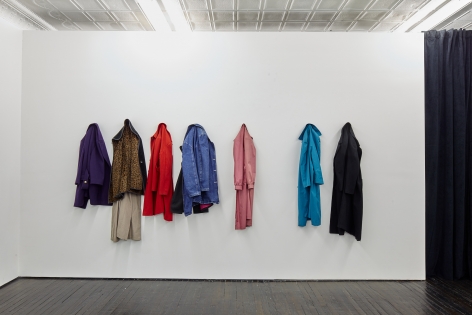 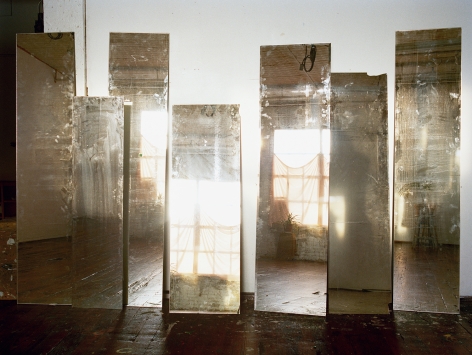 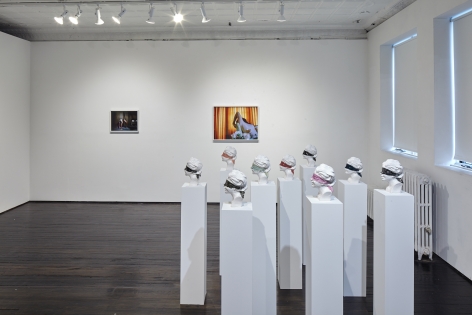 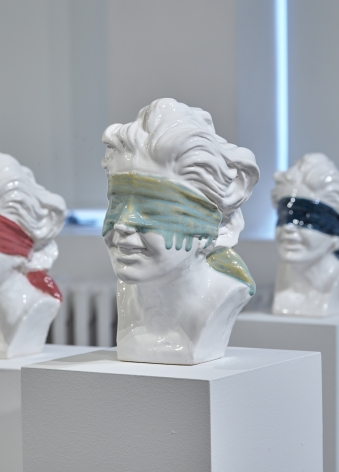 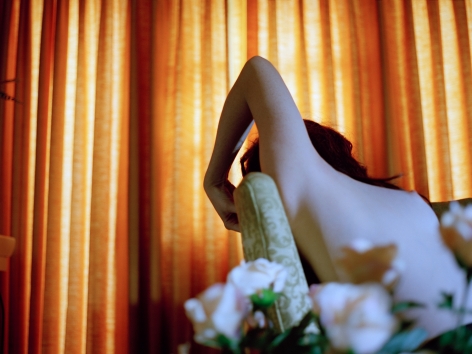 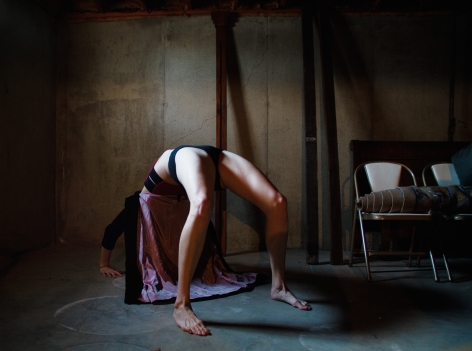 Jack Hanley is proud to present I See You, a solo exhibition by Cortney Andrews.

Cortney Andrews creates cinematic videos, performances, sculptures, and photographs to portray physical and psychological thresholds. In her new body of work, Andrews explores the boundaries of performance and witnessing, the cultural fascination with observing the distress of others, and how seeing and doing form our senses of self. The exhibition consists of a two-channel video installation depicting active and passive modes of engagement, photographs that obscure, to varying degree, the body of the artist in her own work, and ceramic busts that tense the relationship between visual perception and emotional experience.

In the central two-channel video installation, Exposure, Andrews’s performers are seen standing with their backs to the camera, shedding their coats and dropping them to the floor simultaneously. The two videos appear to mirror each other initially, but then diverge as one group deviates by turning towards the camera while the other group disappears. As they continue to shed and replace their coats with increasing urgency, their physical exhaustion becomes apparent, performers depart when they can no longer maintain momentum until only one woman remains. The opposite projection reveals the departed performers watching and recording her struggle with their cellphones as they stand in the shadows. The group continues to look through their cellphones even after the woman has departed, placing the viewer in the position of looking and being looked at.

In the back room, is a series of nine ceramic busts, corresponding to the performers in the video. Each bust, titled Blindfolded Busts (Napoli), depicts a disembodied head, blindfolded, with a disturbing grin. The expression on the busts suggests an internal experience of mischievous pleasure not contingent on sight, or perhaps liberated absent of vision.

Three photographs are presented alongside the ceramics. In these images, a face is never revealed and the body is cropped, covered, or entirely invisible: a female figure wearing a coat is depicted on the floor in a backbend; a pale white torso is awkwardly posed behind fake flowers; and a group of full-length mirrors hides the reflection of the photographer. Although each of the photos is a self-portrait of the artist, she obscures her visual identity by rendering her body fragmented or completely absent.

Andrews’s exhibition I See You is inspired by Julio Cortázar’s short story Blow-Up. In the story, the protagonist attempts to uncover the “truth” of a scenario he witnessed by blowing up a photograph. The result of his photographic reproduction is troubling; the closer he gets to the real, the more imaginary it becomes. His encounter with his own photograph describes the experience of looking at reality mediated by technology. What is “seen” is not necessarily there, and opportunities for projection of fantasy onto reality abound. The real truth of the image is internal, a historical truth, a trauma, some other imposition of the personal onto the present moment.

We look and we look away, we open and close our eyes, we engage and disengage in the action, and in doing so, we move between what is true and what is imaginary without a clear sense of those boundaries. And so too we experience situations, others, and ourselves, wondering if we are in on the act or not, how we are seeing and being seen, and whether our grip on truth and reality can exceed the limits of perception.

Cortney Andrews is an artist working in video, choreography and performance. Born and raised in Kansas, Andrews received her MFA in Photography from the Rhode Island School of Design. She attended the Skowhegan School of Painting and Sculpture in 2014 and Yaddo in 2013. Andrews has exhibited in New York, Detroit, London, Los Angeles, and throughout the US, and staged performances at the Los Angeles County Museum of Art, Streb Lab for Action Mechanics and Jack Hanley Gallery. She is the recipient of the Franklin Furnace Fund Grant for Performance Art and the Foundation for Contemporary Arts Grant. Her solo exhibition at 106 Green Gallery in Brooklyn, NY was reviewed by Artforum and chosen as a Critics’ Pick. Andrews is also the Co-Founder and Director of Offshore Residency, a traveling artists residency program on a sailboat. She currently lives and works in Brooklyn.