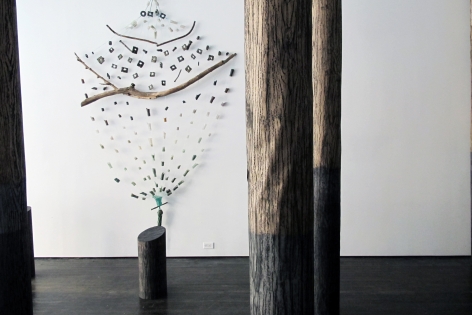 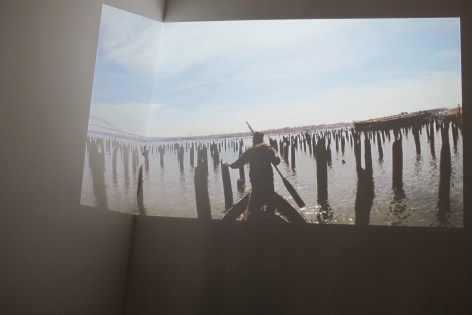 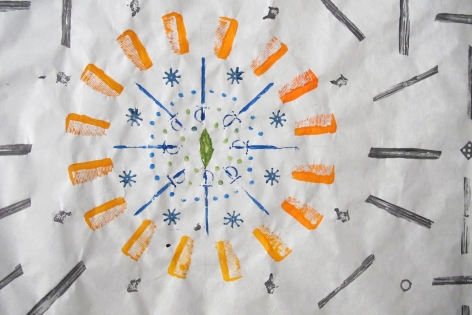 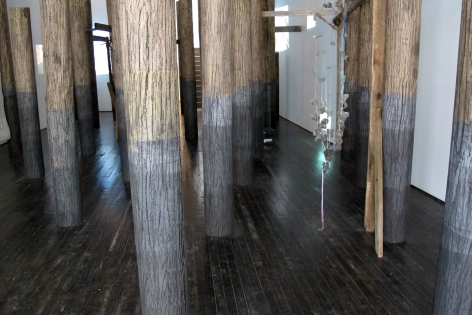 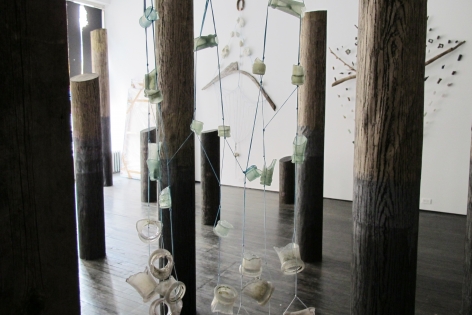 Jack Hanley Gallery is very pleased to present The Valley of Dry Bones, a video installation by Marie Lorenz which includes the premier of Ezekia, a 5-channel video set in an imaginary future. Ezekia tells the story of a group of women exploring the shore of a lost city. The camera follows them as they sort through the wrecked debris that civilization left. By using cameras at extreme angles, Lorenz intensifies the feeling of floating that has been central to her practice of floating videography.

The accompanying installation transforms the gallery into a gridded structure, like a collapsed pier, or the pilings of a giant dock. Nested into the ruins are fragments of a new order of things: a macramé net of washedup debris, a written language of flotsam. The objects invite the audience to explore an imaginary coast a unique place that confuses the past and future in a parallel but hidden world. Lorenz’ previous works archive real experiences; such as a long trip around the city’s coast, or a sailing accident.

In contrast, The Valley of Dry Bones delves into a fictional or utopist future. The artist considers the show against Paul Valery’s call for science fiction to produce a ‘yet unknown kind of aesthetics’. In the collection of essays, The Outlook for Intelligence(1919), Valery wrote about our civilization coming to terms with its downward trajectory, “We were aware that the visible earth is made of ashes, and that ashes signify something.”(1) Each of Lorenz’ sculptures is an attempt to engage that significance by proposing a new interaction with garbage. The artist combines natural and man made objects, valuable material, and things that float up out of the sewer. Somehow Lorenz’ proposal for the ‘yet unknown’ seems familiar – it is our own trash, but this ubiquitous debris is worked into a net of new meaning. On the coast of the city, we are already living in the future. Time moves more quickly here, as the water erodes our foundations. Things come and go with greater urgency. Sea level rise is already a apparent. Watching carefully as the tide rearranges our debris, we witness a daily transmogrification. “We see now that the abyss of history is deep enough to hold us all.” (2)

Marie Lorenz (b. 1973) lives and works in New York City. She received a B.F.A. from Rhode Island School of Design and an M.F.A. from Yale, where she now teaches in the Painting Department. Lorenz has receive grants from Artists Space, the Harpo Foundation, and in 2008 she was awarded the Joseph H. Hazen Rome Prize for the American Academy in Rome. Her work has been included in shows from High Desert Test Sites in Joshua Tree, California, to MoMA PS1, in New York City. She has completed solo projects at Ikon Gallery in Birmingham, England, Artpace in San Antonio, Texas, and here at Jack Hanley Gallery in New York. In May, Lorenz will perform a version of her ongoing performance, ‘Tide and Current Taxi’ for Frieze Projects, providing an alternative ferry service around Randall's Island during Frieze New York.

The Valley of Dry Bones is the artist's third solo exhibition at Jack Hanley Gallery.