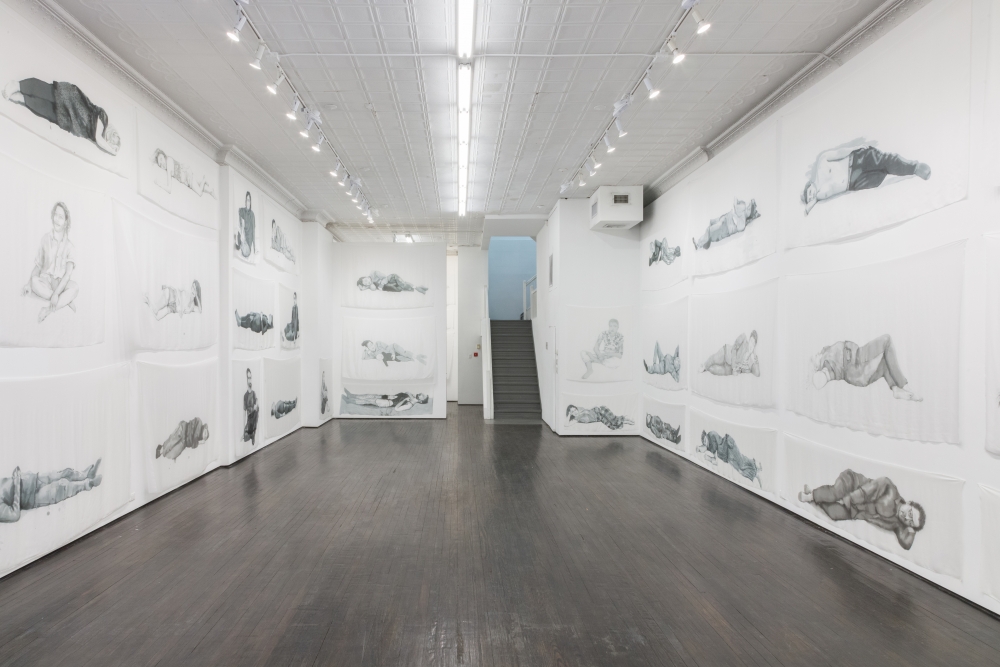 “Sculpture is so heavy and fragile, and you really have to have the setup for it,” the New York–based artist Elizabeth Jaeger told me recently. Over the past decade or so, Jaeger has concentrated mostly on that medium, but on the day we spoke, we were standing in a room hung with around 50 portraits dyed onto woven silk, some of them gently swaying on the wall. These works comprise Jaeger’s current exhibition, “Hours,” which is on view through February 10 at Jack Hanley Gallery on Manhattan’s Lower East Side.

“I used to paint a lot in high school and some in college, and I wanted to do something that felt less caustic, both on my own body and on the spaces I was inhibiting,” Jaeger said, of her return to painting, which started in 2017, at the Shandaken: Storm King arts residency in New York’s Hudson Valley. It was there that Jaeger started making dye-on-silk works out of her window at night. Once she was back in New York, she tried to approximate the process at her Brooklyn studio, but her view was decidedly less bucolic: all she could see was another building on the other side of the street. “It didn’t have the same type of infinite-gaze feeling,” she said.

This actually wasn’t Jaeger’s first time working with silk. She is friends with Asher Katz, owner of the artist-materials company Jacquard, and years ago she traveled with the company doing product demonstrations. More recently, during the making of “Hours,” she worked directly with Katz and Jacquard Inkjet Fabric Systems’ president, Hunter Ellis, on a series of material and ink tests. The coating and thickness of the silk varies throughout the exhibition, producing subtly different results upon close inspection.

Working with the medium once again, Jaeger said, was in part an attempt to “figure out a way of painting that felt right.” She tried working from imagination and photos, the latter of which led to real-life subjects, starting with friends. The artist’s first subject, the writer and editor John Arthur Peetz, set the tone for the entire project. “When you’re asking people to do something, for me, it’s really hard to make any sort of exceeding demands, so I was asking people to come as they are and wear whatever makes them feel comfortable,” she said. “And John Arthur really wanted to wear lingerie, because he was newly interested in it. So it wasn’t like an ask at all, it was just that he wanted to be portrayed that way.”

Following that first session, the artist gave her subjects—a mix of friends and more casual acquaintances, some of whom may be recognizable to followers of contemporary art and culture—free range on both dress and pose. When people asked how they should situate themselves, “I wouldn’t tell them anything,” she said. “The few times that I did tell people it looked so awkward. I could tell they were trying to maintain a body position that I had prescribed versus a way that they would sit naturally.” A sense of naturalism is perhaps the defining feature of these works. Everyone looks comfortable within their own perimeters of what it means to be comfortable. Some look peaceful, some playful, others worried; Jaeger told me that one subject had a hand down their pants for the entire duration of the session. Many fell asleep.

“The process is really intimate, and it takes four to six hours and there’s no screens because they’re sitting and I’m painting,” Jaeger said. “And it really forced me to talk with people and pay attention to people and be present to people and hear what people are thinking about, both in their own personal lives and bigger concerns.” This kind of connection can pay spiritual and artistic dividends, but it can also be intense. Jaeger said that some conversations lingered in her mind for weeks. “I started having a lot of profound respect for therapists,” the artist said.

Though not without its stresses, one perk of painting, versus sculpture, is that it’s easy transport. “I had this dream of being able to bring my studio anywhere I go, which I did a little bit,” Jaeger said. Outside of New York, she completed portraits in San Fransisco, Paris, and even a boat going between Greek islands. “I had a roll of silk and a backpack and I was traveling around with this tube and I could roll it out and roll it back up really fast,” she said.

Back in New York, the portraiture process could be seen as a way of fostering intimacy and dialogue in a city whose hectic pace can often put a cap on the depth of personal relationships. “I feel like New York is a place where most social interactions are two hours max—you go to dinner, you go to an opening,” Jaeger said. “I think just spending the amount of time with people, I got to know people a lot better.”