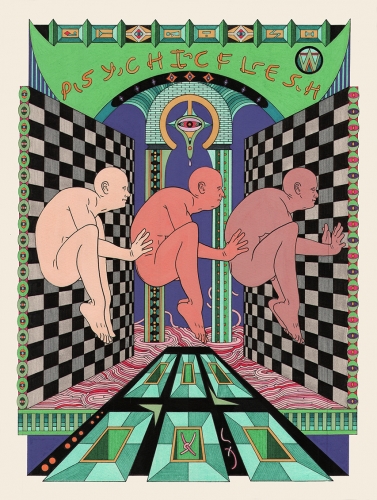 Jack Hanley Gallery will be hosting an exhibition titled “Everything not saved will be lost” by artist Jess Johnson at the gallery’s New York location.

The exhibition presents recent works by New Zealand born, New York based artist Jess Johnson (b. 1979 in Tauranga, New Zealand), marking her debut solo in the United States. Influenced by the speculative intersections between language, science fiction, culture and technology, Jess Johnson’s practice encompass drawing and installation that conjures up dystopian spaces that combine densely layered patterns, objects and figures within architectural settings. The recipient of The John McCaughey Memorial Prize for her commission for the National Gallery of Victoria in Melbourne, Johnson’s works has been the subjects of recent solo exhibitions at Talbot Rice Gallery at The University of Edinburgh, at the National Gallery of Victoria in Melbourne, at Ivan Anthony Gallery in New Zealand, at Darren Knight Gallery in Sydney, and at the TSB Bank Wallace Arts Centre in New Zealand; as well as part of group shows like “Future Nature” at Jack Hanley, “Hiding in Plain Sight: A Selection of Works from the Buxton Collection” at the Bendigo Art Gallery in Australia, “Believe Not Every Spirit, But Try The Spirits” at the Monash University Museum of Art in Melbourne, and “Don’t Hide The Hate” at the Slopes Gallery in Melbourne.

The hand-drawn images of Johnson reflect a formative interest in 1980’s science fiction, horror movies, video games and comic books, creating environments of ancient yet futuristic alien civilization populated by mystic characters like bat-faced demigods, gargoyles, worms and genderless pink humanoids that are contorted into ritualistic positions that waver between torture, rapture and worship. Incorporating vestigial text in these drawings, the artist illustrates the synchronous formation of the world’s language, with phrases like “Milxyz Wae” or “Transkin Simulator” dictating the rhythm of the drawing’s composition. As a natural continuation, Johnson expands her two dimensional practice into the physical space through installations, video animations and most recently virtual reality. She has recently collaborated with video artist Simon Ward and sound composer Andrew Clarke to translate her drawings into animated Virtual Reality, allowing her audience to have the simulated experience of entering the hypnotic realms depicted in her drawings.