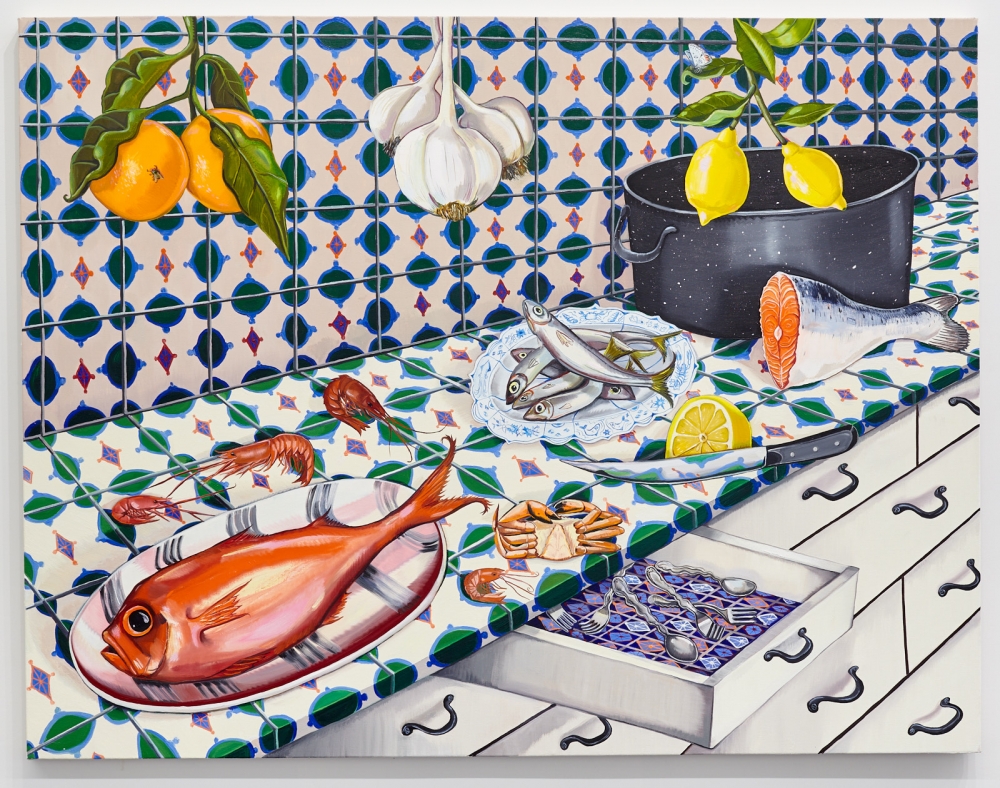 The dog looks sheepish. The cats are freaking out. A bird appears comparatively chill—until you notice how desperately his talons clutch the perch. In Nikki Maloof’s newest paintings, even animals aren’t immune to the perils of Trump’s America. The long shadow of current events is in the works, too, in the form of copies of the New York Times with headlines like “Cry Whenever You Need To” and “How To Be More Resilient In Utter Chaos.” These pets are as confused as their human companions; if they could use the internet, they’d also be obsessively refreshing the page to read about the fallout from the Mueller report.

“I never want these paintings to be just about animals—they’re really not about that at all,” Maloof tells GARAGE. “They’re always just a way of working out how I’m feeling about whatever stage or thing I’m going through.” Indeed, the artist thinks of her painted animals more like “really great vessels” that can contain multitudes: fear, frustration, stress. Despite the menagerie present throughout her work, Maloof doesn’t actually have any pets, though she did grow up in a home filled with all varieties (“I wanted to be an animal, basically,” she says).

The works in “Caught and Free,” on view through April 21 at Jack Hanley Gallery in New York, are some of the biggest and most intricate Maloof has ever made. That’s partly the result of the much larger studio the artist acquired after decamping the city for South Hadley, Massachusetts a year and a half ago. “Compositionally, they’ve become more complicated, and that’s another way for me to feel like I’m pushing them beyond just something cute,” she says.

Bouillabaisse (2019) is a good example: a scene of various seafoods being prepared on a lushly tiled countertop. While it’s also an animal painting of sorts, all the animals are dead. It’s Maloof’s attempt to riff on the traditions of Dutch still life painting, and the work contains similar tiny, loaded details—a fly alighting on an orange; a fork with its tines bent back rudely. There’s also what might be a red snapper, whose lifeless face still telegraphs distress. While Maloof doesn’t have the same affinity for marine life as she does for cats or dogs—“usually, fish don’t really inspire my feelings,” she admits—there’s still a complicated emotional dance going on. “I doubt that [Dutch still life] painters had it in their minds to make them so expressive, but there’s something about a fish looking up at you,” Maloof adds. “If you could ever feel empathy for a fish, it would be in one of those moments.”

Linger with these paintings and their surface cuteness does begin to dissolve. The cat staring at butterflies outside the window wears an expression of cartoonish concern; an open pair of scissors resting on a table suggests a violence held just at bay. There’s also something charmingly off about the creatures themselves, which are varying shades of realistic. Maloof doesn’t base any of them off of actual animals, and she avoids working directly from photographs. The results can be funny or unnerving—as with the dog in Root Bound (2019), which appears to share DNA with a javelina. While there are no humans in these paintings, they still contain the quiet wreckage of the human experiment.

Maloof’s cats, dogs, and birds stare back at us, confused and sometimes scared, to ask a simple question: What the hell have you done? “When I think about animal paintings there’s something sweet about them, and I never want anything to be too sweet,” she says. “I want it to reflect an intensity.”