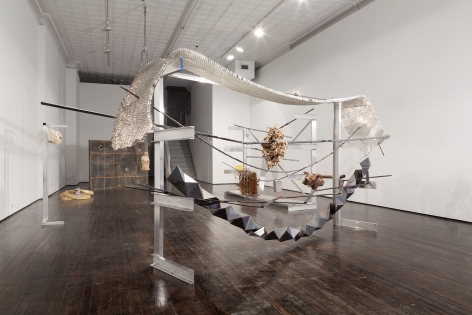 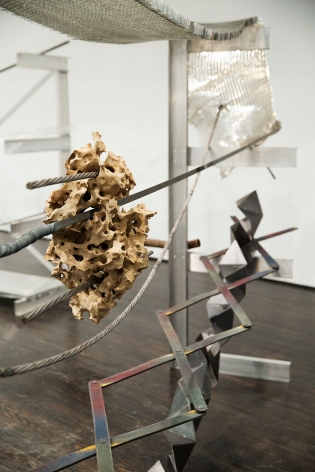 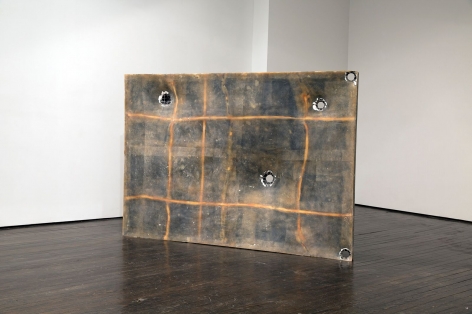 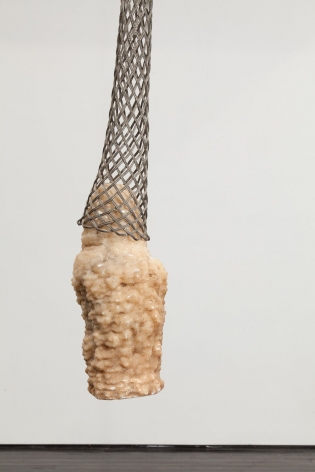 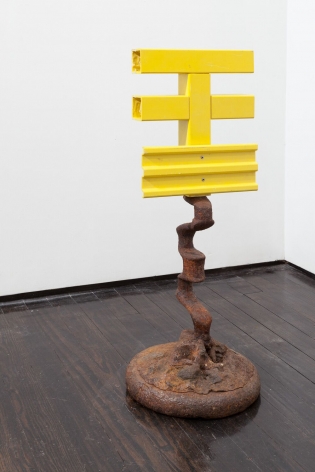 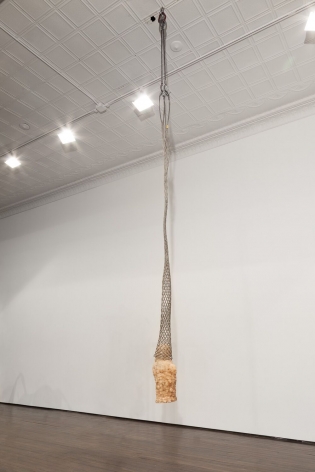 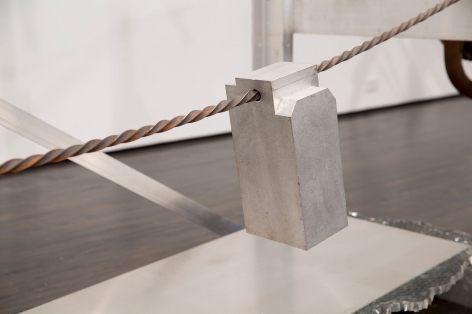 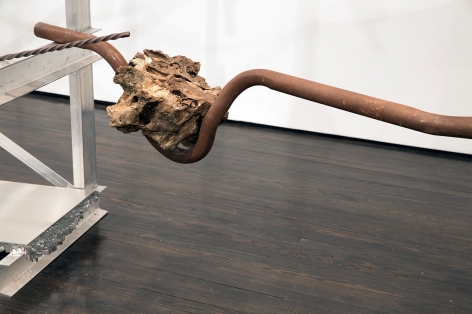 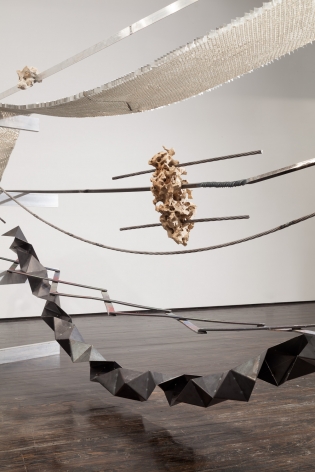 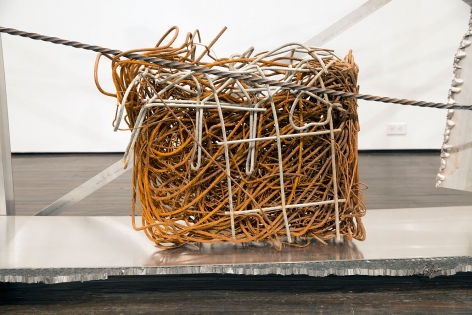 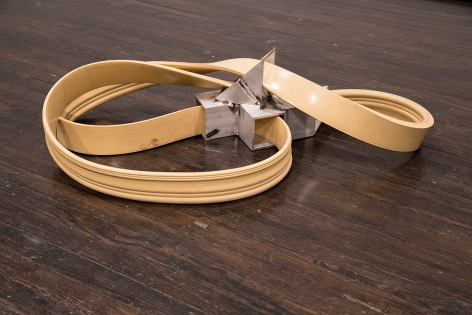 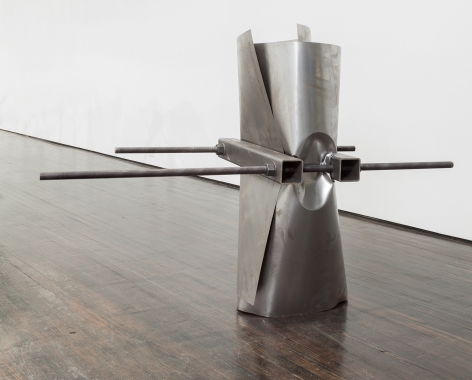 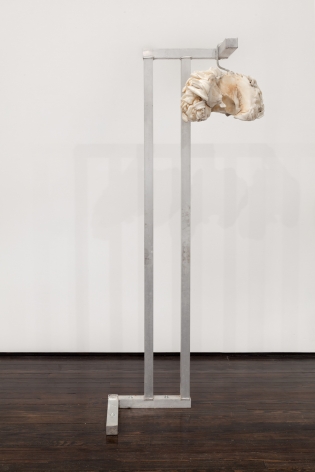 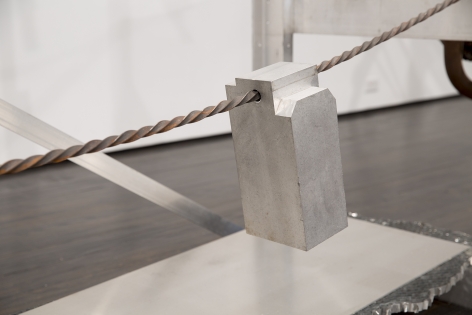 All of them were in the form of regular geometric solids: spheres, tetrahedrons, cubes, cones and so on… There were tori, solid crosses, and even something that looked like a Mobius strip… the solids filled more than half the sky, as though a giant child had emptied a box of building blocks… Then, all the geometric solids began to deform. They gradually lost their regular shapes, as though they were melting in the heat. The deformation accelerated and the resulting lumps became more and more complex. Now the objects in the sky no longer reminded people of building blocks, but of a giant’s dismembered limbs and disemboweled viscera.

Jeff Williams second show at the gallery, Bending Moment, composes overlapping measures of time, from chemical reactions that occur over several years, to swaying cables put in motion by people walking past. Subjecting architectural materials to transmutations in the studio, Williams uses a range of possible conversions on an industrial scale. Crushed, slumped, fractured, stretched, an array of things existing in a warped state. These are combined with geological formations and human made fossils, primarily industrial waste. Each component has experienced its bending moment at a different register, a length of steel twisted in the forge for thirty-minutes is threaded through a chunk of fossilized corral that bent into its current form millions of years ago.

Bending moment is a term used in physics to describe the point when a structural element bends to external pressure, compromising the integrity of the support. Williams uses the term both literally and metaphorically, enacting the moment in lengths of architectural materials and qualifying found objects that evidence a lasting transformation. Combining the two in his sculptures, Williams presents cycles of emergence and deposition.

Similar to a materials mutability, an objects meaning shifts over time, in its potential value and power as a thing with a lived history. In Black Hole, Williams repositioned a former physics chalkboard for lectures on space-time and sanded it down to reveal its original cast resin surface, erasing through the table’s history. Over the past 40 years, physicists have proposed multiple solutions, forcing the field to rethink black-hole behavior. The table represents a bend in our understanding of the universe, how frequently our knowledge is augmented, rendering previously believed systems obsolete.

Jeff Williams (b. 1976, Massachusetts) lives and works in Austin and Brooklyn. Recent solo and two-person exhibitions include New / Used / Wet / Broken, 1708 Gallery in Richmond, VA and Microwave Mint at Helper in Brooklyn as well as For an Abstraction: Christopher Culver & Jeff Williams at Co-Lab in Austin, 11 week interval, at the The Contemporary Austin in Austin, Texas and 9 week interval at Spaces in Cleveland. Recently, the artist participated in Troy Brauntuch, Andy Coolquitt, Jeff Williams at Lora Reynolds Gallery in Austin, House, What is Your Crime? at the Knockdown Center in New York, How The Light Gets In at The Glassell School at The Museum of Fine Arts Houston, October 18, 1977 at Klemens Gasser & Tanja Grunert, Inc. and Weird Science at Jack Hanley Gallery in New York.

Williams received his BFA from Columbus College of Art and Design in 1998 and his MFA from Syracuse University in 2002. Williams has exhibited across America and internationally, and in 2012 he received the Texas Prize from The Contemporary Austin. Williams has received numerous accolades and residencies, most notably from the Headlands Center for the Arts in Sausalito, California, Artpace in San Antonio, Galería Perdida, in Michoacán, Mexico and the Core Program through the Museum of Fine Art Houston, Texas. The artist received fellowships from the Socrates Sculpture Park in New York and the American Academy in Rome through The Leonore Annenberg Foundation.